In preparation for shopping the latest version of Gayland in the next few months we’ve recently completed a photoshoot with San Francisco Bay Area photographer Tom Minczeski. Here are some of of our more serious compositions.  : ) 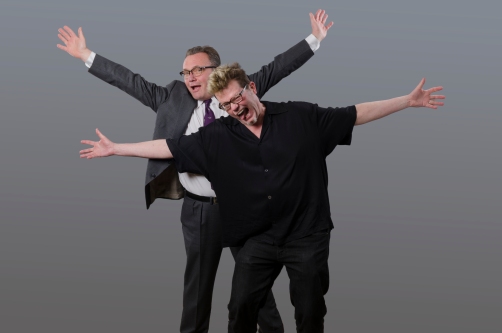 The Gayland reading on Wednesday, February 15th in New York delighted the audience of 25 with plenty of laughter. The new “Young Buck/Old Buck” delivered lots of belly laughs by using classic operatic allusions to highlight the competition between Zack and Gaige during Zack’s first day on the job at the Willow Show. The new “#BringBackZack” came across as a bundle of joyful energy. And the audience named the revised “I Wanna See Your O Face” as its favorite song. Creators King and St. John were also able to see spots where new music wasn’t working as well, and in need of revision.

The learning overall was that the Gayland 6.0 revisions solved the earlier structural problems. So now there’s a sturdy scaffolding in place, and the next round of revisions will be fine-tuning particular musical pieces.

Neither sleet nor snow nor soggy toes prevents the Gayland team from forging ahead!

We recently had a conversation with Christopher St. John and Scott King about their new project, ‘Gayland’. It’s a musical comedy that will be lots of fun.

Twist Online: So give me the premise for Gayland in a nutshell.
Christopher St. John: It’s a love story set in an alternate universe in which almost everyone is gay. And there are just a few breeders. They’re this marginalized group, struggling for their rights.

Twist Online: And what’s the meaning of this rainbow Confederate flag logo? {Editor’s note: This logo was changed later in 2017.}
Scott King: In the recent history of the Gayland version America, there was a group of states that held breeders in subjection. The females were used as breeding stock, and the males were used for labor.

Twist Online: Ouch! A little too familiar. So when you did you first have Gayland on the stage?
Christopher St. John: In the New Orleans Fringe Festival in 2013.

Twist Online: In the south? Was it controversial?
Christopher St. John: There were some rumblings. But a lot of people loved it.  Of course, it was a Fringe audience.
Scott King: We were in the largest Fringe Festival venue, Marigny Opera House. And by the end of the Festival, it was standing room only.
Christopher St. John: One of the local papers, NOLA Defender, called Gayland “the must-see of Fringe Festival.”

Twist Online: So this is about a gay world, but I understand that one of you is gay, and one of you is straight.
Scott King: Correct.

Twist Online: Okay, now you’re freaking me out. How did you two meet?
Scott King: We met in a church in San Francisco.

Twist Online: In a church?
Scott King: Yes, an Episcopal church.
Christopher St. John: St. Gregory’s. And there were like tons of composers there. All the music was a capella. We did a lot of chant and modal music.
Scott King: Actually, the first big piece that Christopher and I worked on together was a Passion. We harmonized the gospels. Literally.
Christopher St. John:  And then we did an opera set in the world of pharmaceutical marketing. A comedy, of course.
Scott King: Oomph! it was called.

Twist Online: What’s happening with Gayland now?
Scott King: We’ve been workshopping it in New York. We had a great read on the main stage at the York Theatre.
Christopher St. John: They’re a very forward-thinking company. They were part of the development for Avenue Q.
Scott King: Every time it’s in front of an audience, we learn more.
Christopher St. John: We get a lot of good response to the fact that we have so many strong women characters. There’s still a hunger for that.
Scott King: The whole Gayland world is female-led. Breeder guys are at the bottom of the heap.

Twist Online: Next public performance?
Scott King: We’re having a table read at 224 Studios in Manhattan on February 15th.
Christopher St. John: Our aim is to create a version that can work on Broadway. 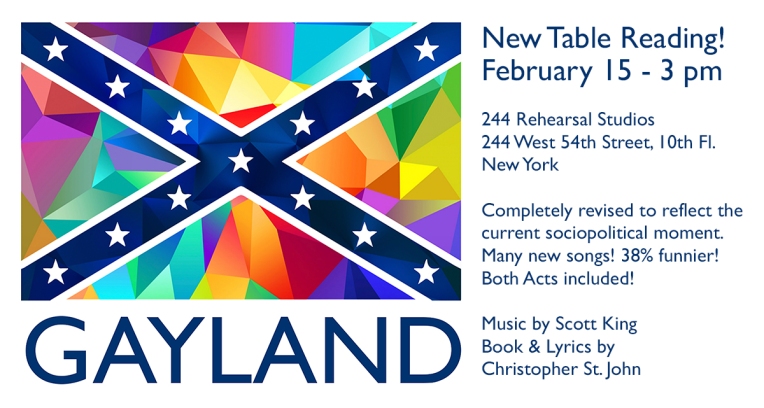 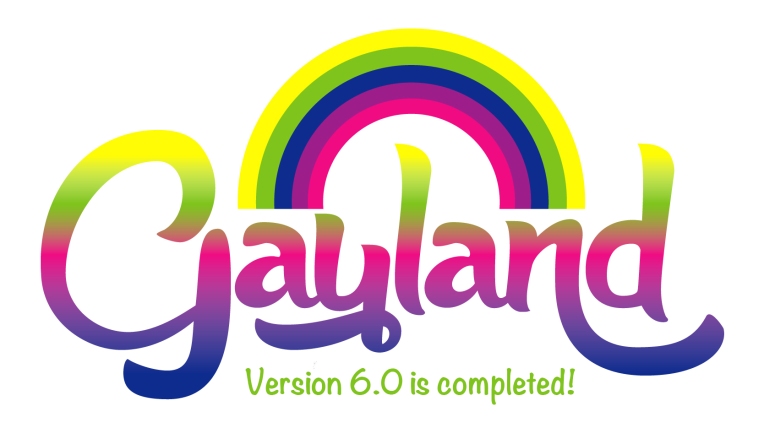 We’ve recast Gayland completely to make it reflect the current sociopolitical moment, and we’ve also redone a lot of the songs, with an eye to making them funnier. We’re currently organizing a Table Read for both Acts 1 and 2 in Manhattan in February.

The Gayland writing team is meeting over the weekend to make edits to Act 1, based on what we learned from the recent Act 1 reading in NY. Thanks much to the audience and your varied and perceptive feedback. It’s really helping us make the choices required to slim down and add oomph to the first act.

Here’s our wonderful cast rehearsing one of the new songs, “Breeder Love Promo.”