Check out the latest Gayland animated lyric video! This one spoofs the opening number of a little musical you may have heard of.

“How does a breeder, deevie, son of Mother God and two daddies…”

We’re putting together a series of videos to bring the words and music of Gayland to life, right before your very eyes!  The first video is for “Rainbow, Shmainbow,” Gayland’s opening number. 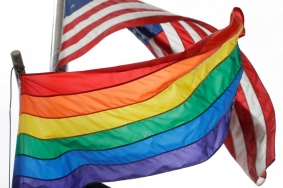 The latest results of an ongoing poll commissioned by the gay rights organization GLAAD shows that support for gay people is eroding in the US.

“We are surprised at the scale and the swiftness” in the erosion of tolerance in the course of one year, Sarah Kate Ellis, GLAAD president and CEO.

We’re rounding out our collection of downloadable tracks with recordings from live performances.

These are from Fringe Festival in New Orleans and Table Reads in New York, spanning 2013 to 2017.

Here are the new songs we’ve just added. We’re also interpolating this into the downloadable song files on the Downloads page, so it’s possible to hear almost all the songs in order.

According to NBC News, at least 129 anti-LGBTQ bills were introduced across 30 states during the 2017 state legislative season. This info is from a new report published by LGBTQ advocacy group Human Rights Campaign (HRC).  Twelve of these bills, which range from adoption laws to “religious freedom” legislation, became law. “If an LGBTQ couple drove from Maine to California today, their legal rights and civil rights protections could change more than 20 times at state borders and city lines,” HRC President Chad Griffin said.

In Gayland, a conservative politician tries to pass the Breeder Repatriation Act as a way to get rid of all the breeders. As this NBC News story shows, we are just a step or two ahead of reality. Read story 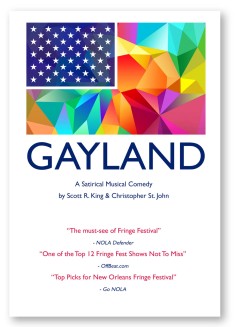 We’re beginning the process of shopping Gayland around to producers and organizations of all sizes. So whether you’re a Broadway producer, a director at a local theatre, or a student organizing a guerrilla production, we’d love to hear from you!

In this script PDF, we’ve embedded audio samples of many of the songs, so it’s easy to get a sense of the sound as you read.

Click here to download a pdf of the script with embedded music samples. You can also download full mp3 files of many of the songs here. Just click the links below to hear the Gayland songs we recorded on November 20, 2017 at the the Yellow Sound Lab and Log Cabin studios in New York.  This set is a mix of many new numbers that have never before been recorded, as well as new versions of some old favs that have been part of Gayland since the beginning.

Thanks again to our very talented team!

After a week of rehearsals, the cast, band and music director for Gayland gathered at the Yellow Sound Lab and Log Cabin studios in New York to capture the new music we’ve been working on over the last year. Thanks to our awesome team!

We’ll be going into a New York recording studio on November 20 with the Gayland cast and music director Mark Hartman to make recordings of the new songs. This will be an opportunity for the creative team to hear how the new music is working with the singers. And we’ll also be choosing tracks to include in our presentation to Broadway producers and directors early next year.